La Oficina is a a family owned bilingual business center serving the Hispanic community since 1999 in Raleigh, NC and surrounding towns and cities.

Guillermo Vega, the current owner, joined La Oficina in 2003 and quickly fit into the operations as a trainer of new recruits, tax preparation team leader, researcher, and operations manager. Between 2003 and 2011 he was able to standardize processes, create the company’s website and develop the platform to bring payroll and bookkeeping services in-house.

In 2011, Guillermo acquired La Oficina and took over operations under a new corporate name. Since then, La Oficina has launched an aggressive campaign to create strong relationships with other organizations and have a strong presence in the community. Also, customer service standards and the employees’ handbook were created.

Throughout its existence La Oficina has been acknowledged by the community as an anchor and model of a Hispanic business. The company has received a Fusion Award and in 2013, Flavia Vega was recognized as Business Woman of the Year at the Excelente Awards for her role as relations manager for La Oficina and Executive Board Member of the North Carolina Hispanic Chamber of Commerce. .

Guillermo Vega has been an instructor in many entrepreneurship events organized by The City of Raleigh and by the North Carolina Hispanic Chamber of Commerce and now, him and his wife, Flavia, are members of the Migrant Worker Council, a multi-agency organization created to provide for the needs of the migrant workers of North Carolina and their families.

We believe that consistent, ethical and quality services are the core values and the essence of our relationships with our employees, customers, business partners and the community, that result in loyal, long-term relationships. 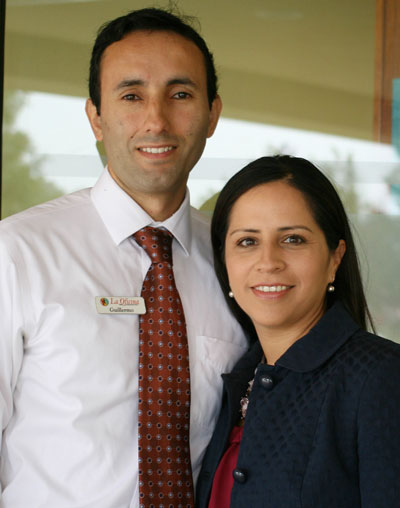 At La Oficina we pledge to provide incomparable and superior quality services as we strive to gain the respect and trust of our customers. We focus on educating and helping the growing Hispanic community through the consolidation of basic services under one roof.

At La Oficina we provide you with knowledge, tools and services in the areas of accounting, tax preparation and payroll for small businesses. We also provide document translation services, notary public, money services, international shipping, and more.

Our vision is to positively impact the future of the Hispanic community in the US. We hope to become the most preferred and trusted tax services provider who deeply cares for the needs of North Carolina Hispanics and minority-owned small businesses.

Our employees find an opportunity for a life-changing career that is as exciting as it is significant in making a difference in a customer’s life.

When we welcome our customers into our family, we help them build a secure foundation of values and aid them with integrating into American society.